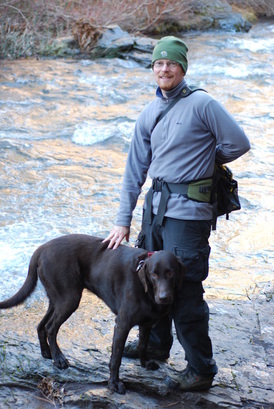 Bio: I am an Associate Professor of Hydrological Sciences at Michigan State University in the Department of Earth & Environmental Sciences. Previously, I was a Gaylord Donnelly Environmental Postdoctoral Fellow at the Yale Institute for Biospheric Studies and the Yale School of Forestry & Environmental Studies. I received my PhD in Water Resource Science from Oregon State University. During my PhD I was an NSF IGERT - Ecosystem Informatics Fellow in the Department of Geosciences and the Water Resources Graduate Program. Prior to receiving my PhD, I received my MS in Watershed Science from Utah State University's College of Natural Resources, and my BA in Geology from Colby College. I have also served as a visiting scientist for New Zealand's National Institute for Water and Atmospheric Research and France's H2O'Lyon and Universite de Lyon. I was also a consulting groundwater hydrologist for CDM-Smith, Inc before starting my academic career.
My passion for fresh water resource issues and my research of catchment hydroecology has enabled me to work with and assist scientists and decision makers around the world. My career has taken me from my roots in the Adirondack region of New York, to school, research, and jobs across the diverse lands of the varied regions of the United States, plus the Arctic, Europe, Australia, and New Zealand.
Aside from research, teaching, and service activities, I keep myself busy with family activities, gardening, cooking, zymurgy, photography, hiking, camping, and skiing...for that matter, just about any excuse to get outside is generally welcome!
﻿﻿Curriculum Vitae (likely out of date!) 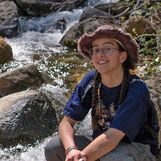 Luisana joined the lab as a full-time research scientist in the summer of 2022. Before joining the lab, Luisana finished her undergraduate degrees in Earth science and computational math at UC-Santa Cruz. She has experience working on watershed biogeochemistry research, including an internship at the Stroud Water Research Center.  She is now becoming a key member of multiple projects in the lab. 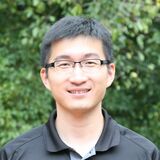 Chao joined the lab as a postdoc in the summer of 2020. Before joining the lab, Chao was a postdoc in the Department of Fisheries and Wildlife at Michigan State University working on evaluating statistical methods of ecological meta-analysis. Chao completed his Ph.D. at the University of Georgia, where he worked on how ecosystem metabolism changes with spatial and temporal scales. He is now working on the Watershed DOC export regimes project. 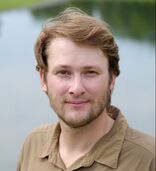 Tanner joined the lab as a postdoc in the summer of 2020. He received his MS from Montana State University (2014) and his PhD from Miami University of Ohio (2020). He is largely interested in how land use and climate change influence biogeochemical cycles and ecosystem metabolism. He has explored these issues across a range of aquatic ecosystems and spatial scales, from eutrophic reservoirs to sub-arctic headwater streams. He is working on the Arctic Watershed Biogeochemistry project, and excited to learn more about this fascinating landscape. 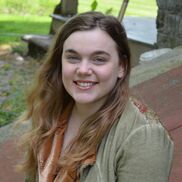 Caroline joined the lab as a PhD student in Summer 2020. Caroline finished her BS in Earth Sciences at Syracuse University, where she worked on spatial and temporal variability in headwater streamflow behavior. Caroline will be working on the Watershed DOC export regimes project.​ 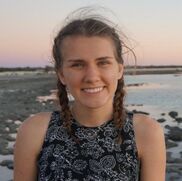 Amelia joined the lab as a PhD student in the summer of 2020. Amelia finished her BS in Environmental Sciences at the University of Notre Dame, where she studied the effect of groundwater flows on conservation practices aimed at reducing nutrient runoff into agricultural streams. Amelia will be working on the Arctic Watershed Biogeochemistry projects. 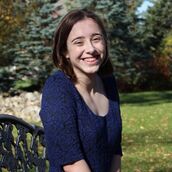 Eryn is a Lyman Briggs major who joined the lab in Fall 2020. She is part of the professorial assistantship program and is very enthusiastic about all of the current lab projects. 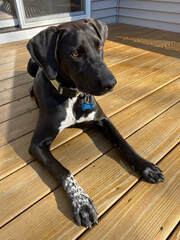 Pepper joined the lab and Zarnetske family in 2019. He spend his early months wandering rural southern Michigan before being rescued and starting his training in deep relaxation, unmitigated exuberance, and aquatic sampling techniques. 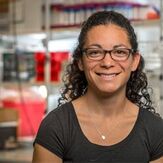 Arial was a postdoc in our lab and is now tenure-track faculty at the University of Alabama.

​Arial joined the lab as a postdoc in the summer of 2018. In 2019, Arial was awarded an NSF Postdoctoral Fellowship to continue her Arctic watershed research in the lab. Arial completed her PhD at the University of Notre Dame, where she worked on the fate and transport of novel materials, such as eDNA and environmental proteins, in flowing environments. During her PhD training, she gained an interest in environmental heterogeneity, hyporheic zones, and scaling issues in ecology. Moving up from reach-scale processes, she is now working on our Arctic Watershed Biogeochemistry projects.
More info here at her website: https://sites.google.com/view/shogrenscience/home

Ben was a postdoc in our lab and is now tenure-track faculty at Brigham Young University.

Ben is an ecosystem ecologist working on dissolved organic matter production and transport across the terrestrial-aquatic gradient. He joined the lab from Rennes France, where he was working as a Marie Curie Postdoctoral Fellow at the Observatoire des Sciences de l'Univers de Rennes (OSUR). He did his Ph.D. at the University of Alaska Fairbanks on the effects of permafrost collapse on carbon and nitrogen cycling and got his B.S. in Watershed and Earth Systems Science from Utah State University.

When he's doing "big science", you're likely to find Ben biking, playing with his family, hiking, making music, blogging about the intersection of science, society, and religion, or . . . biking? Details at benabbott.org.

Joe finished his PhD in 2019 and is now tenure-track faculty at Albion College!

​Joe joined the lab as a PhD student in August 2014. Joe finished his Geoscience M.S. thesis work at the University of Iowa. Through his M.S. thesis he developed and validated a conceptual model for predicting the transport and fate of contaminants using field solute tracer studies coupled with laboratory experiments. He also holds a B.S. in Environmental Science from the University of Iowa. Joe made great strides toward unraveling the complexities of watershed dissolved organic carbon in streams, specifically the fate of organic carbon at stream-groundwater interfaces. 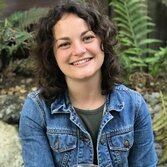 Emma finished her MS thesis on stream-lake interactions in Fall 2021 and is now pursuing science advocacy and policy.

Emma joined the lab as a MS student in August 2019. Emma finished her BS in Environmental Science, Technology, and Policy at California State University - Monterey Bay. Emma is exploring stream-lake interactions and their role in modifying flow and DOC export regimes in an Arctic LTER watershed. 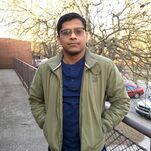 Sinchan finished his MS thesis on bioclogging in hyporheic zones in 2019 and  returned back to India where he is pursuing a PhD.

Sinchan joined the lab as a MS student in August 2016. He obtained his bachelor’s degree in Civil Engineering from the Bengal Engineering and Science University. He worked on the Hyporheic Microzones project figuring out how to advance our ability to model complex microbially-mediated sediment pore water chemistry. He made great strides showing how both biological and physical controls interact to control the unique reaction sites in hyporheic sediments.

Tyler finished his MS in May 2018 and is now working on his PhD at University of Waterloo.

​Tyler joined the lab as a MS student in June 2016. He came to the group after finishing his BS in Hydrology from University of New Hampshire.  He worked as a junior scientist position with the USGS and undergraduate research at Hubbard Brook LTER.  He worked on the Hyporheic Microzone project figuring out the fate of Nitrate in stream and lake sediments through the use of novel tracer experiments. 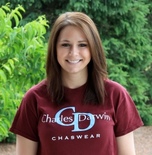 Sydney finished her M.S. in Geosciences in our lab in 2017. She is now working as a state geologist for the Michigan Department of Environmental Quality.

​Sydney joined the lab as a MS student in June 2014. She graduated from Lymann Briggs College at Michigan State University with a B.S. in Environmental Geosciences. 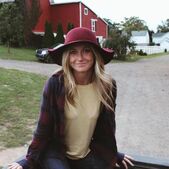 Megan was an environmental engineering major who joined the lab in Fall 2018. She worked on our Arctic hydrology and catchment biogeochemistry projects. 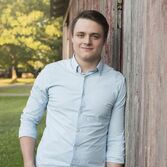 Sam was an geological sciences major who joined the lab in Fall 2018. He worked on our Arctic hydrology and catchment biogeochemistry projects.

Rachel joined the lab in 2017 as a KBS LTER REU. Rachel was studying for her BS in Environmental Science at Western Washington University. She is now working full-time for the U.S. Forest Service! She is interested in the interactions between water bodies and their surrounding environments, and specifically enjoys exploring how hydrology impacts aquatic ecosystems.

Chenxi Li joined the lab in 2018 as an MSU MMG Environmental Microbiology student interested in microbial communities and their function in stream ecosystems, specifically focused on nitrogen cycling in stream sediments.

Elizabeth joined the lab from 2017. Elizabeth was working on her BS in Environmental Geosciences at MSU. 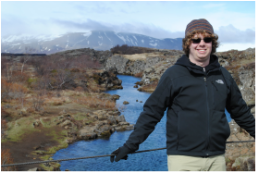 Stephen joined the lab in 2015. He graduated with degrees in Environmental Geosciences and Chemistry. He is now a graduate student at Virginia Tech. In his time at MSU, Stephen conducted hyporheic studies using in situ mesocosms. Stephen also lead a full summer field campaign at the HJ Andrews Experimental Forest LTER as part of the Leverhulme Project. 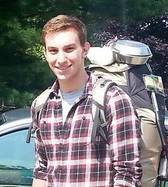 Evan joined the lab in 2015. He graduated with degrees in Environmental Geosciences and Mathematics. He worked on how landscape patterns and processes control dissolved organic matter abundance in stream sediments across mid-Michigan. Evan also helped with the completion of the "Sparty Wells" Groundwater-Surface Water Demonstration Site on Campus. Evan graduated in 2017 and now is in graduate school for Biostatistics. 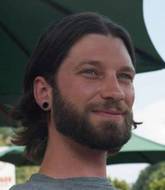 Abraham joined the lab in 2014. He graduated and is now a Teaching Assistant in the Geography Department at MSU. He is now working toward his MS in Physical Geography at MSU. 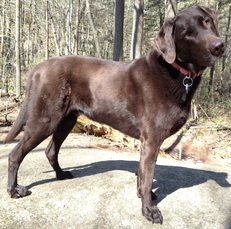 Kenai spent over 14 years pursuing the wonders of aquatic environments through his special interest in large woody debris.  In this time, he sampled over 100,000 forms of large woody debris from all over the United States.  In his late career, he transitioned into retirement and spent most of his time practicing and demonstrating relaxation methods. He was a founding member of the lab.. He crossed his last stream and the rainbow bridge in June 2017.

Wet lab space
Established January 2015! It will never look so fresh, clean, or empty ever again!
Proudly powered by Weebly